Revenge for Bohs at Richmond Park 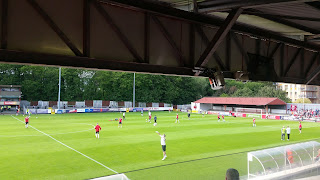 Bohs took revenge for their 4-0 reverse to Pats earlier this season in an archetypal game of two halves at Richmond Park which leaves Pats firmly entrenched in the drop zone. The bunched up nature of the league this season, coupled with the fact that a quarter of the league will be relegated means that most games involving the teams from mid-table down are already becoming six pointers. The Northsiders will be delighted to pull further away in their first game back after the mid-season break.
Pats showed three changes with Peers, Barker and Cregg in for Kelly, Verdon and Kurtis Byrne while Bohs solitary change saw Simon in for the suspended Fitzgerald. The game started very cagily with the only action of consequence in the first half hour being the enforced change of Kurtis Byrne for Alex O’Hanlon. Although his namesake, Conan Byrne, had been growing more influential, when the lead goal came, it came through his substitute.

There seemed little danger on 40 minutes when O’Hanlon received the ball out left on 40 minutes but the Bohs defence stood off as he cut across the box and picked his spot. Bohs looked increasingly ragged at this point so Keith Long must have been happy to reach the break just the single goal behind.

Long made a change at half time with Kavanagh coming on for Simons but whatever he said to his players had the desired effect with Bohs starting the second half on the front foot and drawing level on 51 minutes. Again the defence looked favourites when the ball came to Brennan but he used his strength well to hold off the attention and sweep the ball past O’Malley into the corner. That really sparked the game into life as both sides pressed for a second goal and it was Bohs talisman, Dinny Corcoran, who provided it. Conan Byrne had just another free kick saved by Supple and Bohs broke immediately, working the ball to Corcoran on the left from where he coolly beat the keeper. 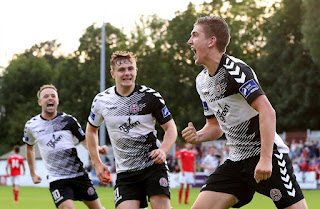 The temperature was rising by now and a melee following a Bermingham foul on Poynton saw Brennan and O’Hanlon join him in the book after they squared off. Both sides continued to press but it was Bohs who made the game safe with the best goal of the night on 86 minutes. Again it came on the break with Keith Ward scampering through after Pats had committed men forward. He had the option of picking out Corcoran or Poynton and it was the latter he chose who made no mistake to clinch the game.