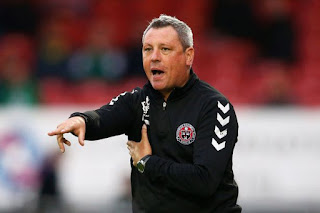 Q: A big win tonight and really a game of two halves?

Keith Long: Yeah, we had a fantastic second half, I was really pleased with it. We came out and set the tempo well. Oscar Brennan showed great desire and hunger to win the ball for the first goal. Then we saw great quality from Keith Ward to put the pass through for Dinny Corcoran which sliced open to Pats defence for the second chance and Ward did great again to set up George Poynton for to stick the third into the far corner. So really pleased with the performance in the second half especially after it had been so disappointing in the first. It’s a massive three points to get in Inchicore for us.

Q: How do you explain the contrast in the performance in each half?

KL: We were a little braver in the second half. I thought we showed Pats too much respect in the first half, we stood off and let them pass the ball around us a little bit. We brought Paddy Kavanagh on at half time and it could have been any of 5 or 6 we could have taken off, Kaleem Simon was the unlucky one. So we made some changes, tried to get after the game a little bit, press the opposition and play on the front foot. The opening goal came at a goof time to spark and ignite us and we grew from there.

Q: It’s a big three points and obviously a derby win, which is important to everyone at the club but to see yourselves moving up that table, starting the second half of the season that couldn’t be better overall?

KL: Well, in my time at Dalymount, we’ve been slow starting after the break so I stressed it when we came back in last Sunday after our break that we wanted to do well and put in a big performance. We’ve been good away from home this season but we let ourselves down in our last performance against Pats at Dalymount where they gave us a 4-0 beating in what was probably our worst performance of the season so we wanted to put in a big performance and gain some retribution and we did that tonight. We’re pleased, it’s a Dublin derby we wanted to win and I felt our second half performance deserved the three points. But we won’t be complacent in any shape or form, we have to show the hunger and desire that we showed in the second half throughout the campaign if we’re going to be safe.

Q: You’ve had trouble with strikers earlier in the season with Akinade out and Corcoran picking up an injury but Corcoran is now back and firing again and Akindae seems to be not too far away?

KL: Well, Dinny is crucial to us, we nearly have to wrap him in cotton wool, his goals have been vital for us throughout the season, he’s a great finisher. He didn’t get a lot of game time here at St Pat’s
last year but he does his business in a quiet fashion on the park and he scored goals and that’s what we like him to do. I was delighted for him tonight, particularly after the year he had last year here.

Q: What are your objectives now, are you looking at a place in Europe?

KL: Well, our objective is to stay in the Premier Division, there’s 6 or 7 teams here with not much between them. I mean. We’ve won tonight and extended our difference over Pats to eight points, had they won it would only been two so it’s very tight. The table is very congested and volatile, it changes every week so we can only focus on our own performance and try and deliver. Winning games is really important, we drew last time and were disappointed in that even though the draw against Drogheda was probably a fair result. We put in an excellent second half performance tonight and if we can continue to do that over the 90 minutes you’d like to think we can pick up some points along the way. But listen, it’s going to be very very tight with lots of twists and turns and ups and downs between now and the end of the year. Our primary objective is to stay in the division.

Q: The injury to Rob Cornwall?

KL: It’s his shoulder but it’s too early to say. He’s been very very good for us throughout the course of the season. Hopefully we can get him back on the pitch soon enough. Warren O’Hora came on and did well. Unfortunately we haven’t been able to select Warren all season as he had an offer of a scholarship to the States which he couldn’t take if he played for the first team. He’s been the captain of our Under 19’s but he’s made the decision now to try and get to the UK and now we can play him in the first team he can try and make that happen.  It’s like a new singing for us.

Q: You must have been delighted how the game finished considering how poor things were in the first half?

KL: Yeah, we were disappointed in the first half, we stood off Pats and allowed them too much time on the ball and showed then too much respect. I’m not sure why, our game-plan during the week was to try and press them high and win the ball high up the pitch and break from there. But first half we were off the pace so had to adjust things at half time. We came out strong in the second half and got an early goal. I felt we could kick on from there and thankfully we did. We got a second and third goal and overall I felt we looked very efficient and certainly had a clinical edge to us.

Q: All 3 goals were quote similar, breaking at pace with a good ball over the top with Corcroan and Ward causing problems.

KL: We asked Wardy to play higher up the pitch as a 10 rather than a 6 or an 8. He was dropping too deep between the lines and into the wrong lines on the pitch in the first half and playing more as a 6 instead of a 10. When he gets balls in that position, he has the quality and he sprung Dinny Corcoran with a sublime pass to split the Pats defence and Dinny doesn’t need a second chance, it was a cultured finish, he opened his body and slotted it in the corner.

Q: It was a great pass for the third as well, Ward had Dinny and Poynton to choose from and make the right decision.

KL: He did and Georgie has a couple of goals and assists for us since he moved out to the right. It’s a bit of a change for Georgie, he’s probably more renowned as a central player but he’s contributed with some goals and assist and that’s what you want your team to do. It was important after the break to come back and get the win and hopefully that will stand us in good stead.

Q: How are things on the squad front?

KL: Izzy Akindae is now back in training, he played 45 minutes in a bounce game during the week and Steo Donnelly has come in from Usher so hopefully we can attract one or two more.

Q: Any further updates on injuries, how is Eoin Wearan doing?

KL: Well, as I said, Izzy is back training but is probably still a few weeks away, we have some friendlies pencilled in to try and get him up to speed. Eoin is probably ahead of schedule but obviously it is a cruciate. I wouldn’t rule him out for the entire season but it might be September before we see Eoin.

Q: I know there’s a member’s drive on at the moment to try and raise some funds for players.

KL: You look at the support tonight and you just think it’s a great club, I’m privileged to work for it, I really am. I’m proud to be the manager of Bohs, I really am. It’s important that we give them something to shout about, they support us through thick and thin. We’ve been disappointing at home this year, I’ve said that prior to the break but we’ve come away tonight and sent them home happy. If we can affect the team in a positive manner by recruiting some good players to strengthen us and improve the group that’s what we’ll try and do.

KL: I don’t really want to comment or speculate on any particular player to be honest with you, Gareth McCaffrey is a free agent, he played against us for Rovers and did well when we went to Drogheda but the window isn’t open for another fortnight and won’t comment on any player until he’s signed and over the line so until then I don’t have anything to report.
Posted by Drumcondra 69er at 13:15