A Tale of Three Irelands

A google search for 'the unifying power of sport' returns just shy of three million results in under half a second. Yet, as much as it can unify, sport also has the potential to divide. Both sides of that coin were visible at Lansdowne Road during the last week as three separate Ireland teams took to the pitch in radically different atmospheres.

Despite being a staunch Ireland fan since I was old enough to form memories, a part of me has always thought it a shame that, unlike the vast majority of sports, there are two separate football teams on the island. The majority of people probably look at the split of the Football Association of Ireland (FAI) away from the Irish Football Association (IFA) as being linked to the partition of the country in the early 1920's. But, while both splits occurred in the same general timeframe after several years of conflict, the conflict in terms of football was as a result of alleged IFA bias towards Ulster rather than the desire for independent nationhood. The final straw was the refusal of the IFA to schedule the Irish Cup semi-final replay between Glenavon and Shelbourne in Dublin and insist that the second game be played in Belfast.

The desire of both sets of blazers for power over football on the island led to both associations claiming to be the defacto association for the island in its entirety. While the likes of the Irish Rugby Football Union and the Golfing Union of Ireland, along with governing bodies for Boxing, Hockey, Cricket etc were doing their best to promote their sports across both sides of the newly drawn border, the two football associations were butting heads with various efforts to reunify throughout the twenties and thirties falling short on sticking points that had nothing to do with the politics of the time but everything to do with perks and power.

In fact, both associations wore the same shirts and used the name of Ireland throughout the thirties and forties. They also carried on selecting players from each side of the border up until 1946 in the case of the FAI and 1950 with the IFA. The growing global nature of the game saw both Ireland's enter World Cup qualifying for the first time at this stage and after Tom Aherne, Reg Ryan, Davy Walsh and Con Martin played in qualifiers for both sides, FIFA intervened to prevent the situation happening again, 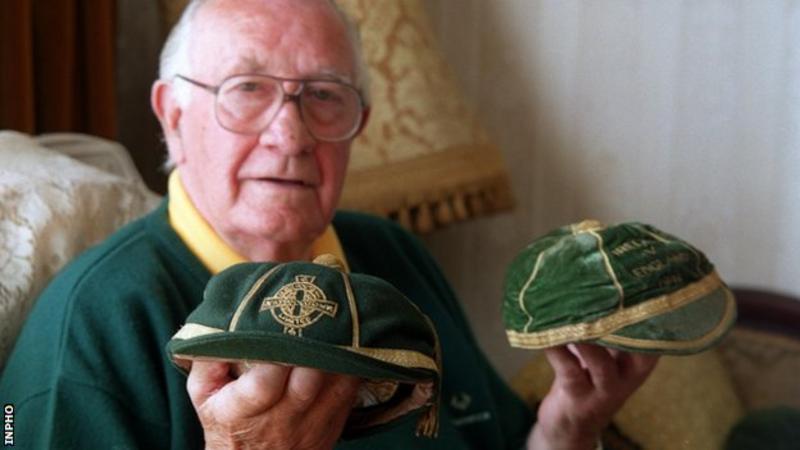 A gentleman's agreement between both sides not to pick players from outside each jurisdiction meant that relations were relatively benign and there were even talks throughout the seventies while the troubles were at their height where reunification was on the agenda. Even George Best went on the record, stating he had ‘talked to several players from the South and they all want to see a full Irish team. I know the Northern Ireland players think the same way.’

Indeed, an All-Ireland squad of 14 including seven Northern players played world champions Brazil in a famous 1973 exhibition game but that team had to take the field using a Shamrock Rovers moniker after IFA objections prevented them using Ireland as planned. In a nice touch, Con Martin's son Mick got one of the Irish goals in a 4-3 defeat.

The All-Ireland side that played Brazil in 1973

Talks continued throughout the seventies although various factors including the two sides being drawn against each other for the first time in the Euro '80 qualifiers prevented a resolution being found. Cormac Moore's excellent book, The Irish Soccer Split, provides great detail on those failed efforts.

The main argument for reunification was that a single side would be better equipped to qualify for major tournaments. This was rendered moot not long after with Northern Ireland qualifying for consecutive World Cups in 1982 (with Ireland only denied by some scandalous refereeing in a number of games) and 1986 and Ireland following suit with qualification for Euro '88 and World Cups in 1990 and 1994. With the qualification for USA '94 sealed amid a poisonous atmosphere in a Windsor Park game against the North, any talk of reunification seemed a long way off and has never been back on any agenda since.

While the atmosphere at Lansdowne last Thursday was a long way from 25 years before, the nasty edge to it was still dispiriting. From seeing pictures of Northern Ireland fans displaying Para regiment flags to the booing of both anthems to Irish fans roaring IRA slogans at 'orange bastards', it was a long way from France two summers ago where both sets of fans mingled good-naturedly. As I said in the aftermath of Thursday's game, maybe the two-year diet of Brexit, backstops and the proximity to the annual poppy fascism season has seen things regress.

It's because of the power of sport to unify that my regret about football being split on the island stems. The lines have been well drawn at this stage between both sets of supporters and it would be nigh on impossible for either group to simply subsume into the other. Reunification of the sides will only ever happen if there's reunification of the nation. I've always wanted to see that but I'm more than aware that if it's ever to happen, accommodating and welcoming the opposing tradition on the island has to be a big part of it.

Watching a packed Lansdowne Road rise to acclaim Jacob Stockdale, the son of a vicar from Newtownstewart in County Tyrone, as he grounded the winning try for a 32 county Ireland against the All Blacks on Saturday, I couldn't help but wonder how the support for a national football team would have developed had no split occurred. And whether that may have had a knock-on effect in society.

The demographics mean that it would be overly simplistic to look at the support that rugby (and indeed other sports such as hockey and cricket) draws from both sides of the divide and extrapolate that to football. While the other sports mentioned earlier have always drawn support from the middle and upper-class ABC1 base so beloved of rugby sponsors and advertisers, football's history on both sides of the border is a working-class one.

And it was within the working class communities of the North that the brunt of the troubles were felt and where identity was something people could grip onto when they had little else.

It would be ridiculous to say that had both communities followed a single team they probably wouldn't have been ghettoised by "peace walls". Or that the civil rights issues that existed in the North would have been solved by sport.

The hooliganism that blighted matches between nationalist and loyalist supported sides in the Irish League is well documented, with the demise of Belfast Celtic and the exclusion of Derry City the most high profile examples of those problems. Indeed, these highlighted the issues that remained within the IFA for years after they had caused the split in the first place.

Despite the efforts that have been made regarding inclusivity, the NI anthem and flag still give credence to the view that, to paraphrase, it's a Protestant team for a Protestant people. Yet it's extremely unlikely that those symbols would have survived to this day if the IFA had been an All-Island organisation rather than remaining one forged in the six counties. With the aforementioned gentleman's agreement long now forgotten, the Ireland team has become a de facto 32 county nationalist team understandably leaving little desire for changing those symbols within the IFA or their support.

Family links with the composer of Amhran na BhFiann make its playing a proud highlight of any Ireland game for me, both at home and abroad. But would a rugby style arrangement with a neutral song (albeit one a lot better than the godawful Ireland's Call) have been palatable to our support had it always been thus?

Looking at how both communities united behind Monaghan boxer Barry McGuigan in the eighties at the height of the troubles in another working-class sport showed that it was possible for supporters from each tradition to unite behind one force. But any individual sportsman has a finite career. In team sports players come and go but the team abides.

How might football on the island have evolved if all 32 counties were cheering a team representing all at the World Cup in 1958? Or if instead of two Ireland's splitting four consecutive World Cup's from 1982 onwards a single team had contested four in a row? Or even if the old Home Nations Championship had become an annual Four Nations tournament throughout the 20th century? A team featuring Jemnings, Giles, Brady and Best while that tournament was still one of the few live on TV couldn't have failed to quicken pulses on both sides of the border.

Tribalism is an inherent part of football but the support of a team generally transcends an individual's politics. Anything that could have shown two fans from say The Falls and Shankhill Road something they had in common rather than what divided them couldn't have done any harm. Instead, the soccer split on the island has simply given some another platform to show off their prejudices.