Pat's Get The Blues 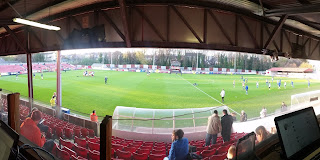 It may be a cliché but Limerick took advantage of the “new manager bounce” to pick up their first win since the opening day of the season in Willie Boland’s first game as interim manager following Martin Russell’s mid-week dismissal.  Pat’s, on the other hand saw their mini revival of recent weeks brought to a halt in an entertaining game at Richmond Park.

Both teams showed one change with Josh O’Hanlon coming in for injured striker Christy Fagan for Pats and David O’Connor making way for Chris Mulhall on the wing for Limerick. Pats began playing a very high press in the opposition half but it was eight minutes before a chance arrived with Josh O’Hanlon heading over a Kurtis Byrne cross. Limerick started playing themselves into the game after the first 15 minutes with Rodrigo Tosi using his strength to great effect.  First the big Brazilian laid off a great ball to Lee J Lynch who shot over on 18 minutes before another layoff to Chiedozie Ogbene who headed back to Shane Duggan to shoot over the bar the following minute.

The Blues’ pressure was rewarded seven minute later following a foul from Ian Bermingham on Mulhall. Duggan stepped up to whip a dangerous ball into the box which Tony Whitehead flicked beyond Conor O’Malley. The goal lifted Limerick’s tails further and Tosi nearly made it two on 30 minutes with an acrobatic effort from an Ogbene cut back pushed wide by O’Malley.

Pats finally came to life as half time approached when an Alex O’Hanlon corner found its way to Lee Desmond on the far post but Brendan Clarke somehow got down to save when a goal seemed certain. Another chance went begging from the resultant corner as the ball was lobbed back into the box only to bounce off the bar enabling Limerick to eventually clear.

Pats started the second half in the same vein and really should have levelled on 52 minutes. JJ Lunney beat 3 players but scuffed his shot into the path of Alex O’Hanlon who looked certain to score only to get his feet tangled up and fall over the ball. Still Pats came forward and finally looked to have got their reward as a penalty was awarded on 64 minutes. A bit of head tennis at the edge of the box fell to Kurtis Byrne whose shot was handled by Robbie Williams. Fresh from his goal of the season contender in last week’s win against Bohs, Conan Byrne stepped up to take it but Clarke got down brilliantly to parry with Bermingham then hitting the post from the resultant scramble. Pats were made to play for their missed chances late on as Limerick hit them on the break. Substitute John O’Flynn had already been denied by O’Malley on 80 minutes but made no mistake three minutes later when picked out with a ball over the top from Ogbene after a Pats corner, waiting for the keeper to commit before coolly slotting it home.  O’Flynn really should have made it three in stoppage time but O’Malley saved leaving Limerick happy to settle for a 2-0 victory.