The Winner Takes It All, The Loser Has To Fall 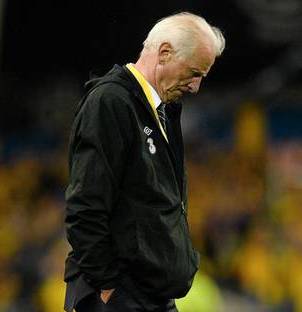 I guess the tone was set pre kick off when we had to endure the unfortunate Nadia Forde absolutely butcher our national anthem.  I'd have been prepared to turn a blind eye to it if that remained the low point of the evening but alas, that wasn't to be.

The matchday experience had been pretty positive in the build up.  Given that this was such a make or break game there was a general feeling of optimism amongst the support and in the media.  The team Trapattoni had picked was quite attacking and unusually, given some of his previous idiosyncratic selections, was pretty close to what most fans would have gone for.  The news that the game was approaching a sell out was welcome and everyone seemed to be looking forward to a big atmosphere with a full house roaring on the team for only the 3rd time since Lansdowne re-opened.  Having managed to get out of work at 4, we strolled down by the canal to our usual meeting spot in the Beggars Bush on Haddington Road and a decent atmosphere was building with a fair smattering of Sweden fans visible and adding to the sense of occasion.  We were due a big home performance and given the recent improvement in form through the summer friendlies, I was pretty confident we wouldn't be beaten and quite hopeful that we could get the 3 points we so badly needed to banish the memory of the last minute Austria goal which still rankled.  When we arrived, the Brummie boys were already there and the rest of the gang gathered over the course of the next couple of hours as we discussed our chances and finalised some arrangements for next week's trip to Austria.  At 7.25 we finished our last pint and made our way into the Singing Section with our new season tickets.  There's been many a time in the past when we've stayed a little too long in the pub beforehand and missed the anthems but now that we're a bit older and wiser we've got into the habit of making it in time for Amhran na bhFiann.  Unfortunately, given last night's rendition we may have been better off hanging on that extra 5 minutes before getting into the stadium!

The ground really did look great with the capacity crowd, the 6,000 Swedish fans in the North end and the side of the East stand seemed to spur on our support with our Singing Section in the South Lower vociferously getting behind the team from the kick off.  I actually think we started very well and won the first corner of the game within minutes when a Long shot was deflected over.  We were playing to a decent tempo and creating a few half chances which was feeding the atmosphere and although Sweden began to come more into the game the lead was deserved when it came.  A James McClean cross had drifted onto the crossbar a couple of minutes earlier but we weren't to be denied for long.  And who else would score it but Robbie Keane who really is our only goal threat these days.  A header back to the Swedish keeper was left short and Robbie nicked in to go round the keeper and prod the ball goalwards.   I actually think Keane was fouled by the keeper which could have resulted in a penalty and a red card had the goal not gone in but he deserves great credit for playing to the whistle and he was straight back on his feet to collect the rebound as the ball came back off the post and Mikael Lustig's heels and bury it in the roof of the net!  Cue lift off at Lansdowne, although to be honest the first thing I said when we'd finished celebrating was that I'd have been far happier had we taken the lead with 22 minutes left rather than 22 minutes gone.

Part of the problem with Ireland under Trap is that we seem to turn into a different team once we go ahead.  And not a better team, a significantly worse one.  Instead of gaining confidence from a goal we seem to retreat into ourselves.  We don't have the Italian culture or the ability to shut up shop and protect a lead and we don't seem to be able to keep doing the things that we were doing well that enable us to go ahead and build on a lead.  When we should be going for the jugular we get caught between 2 stools and allow momentum to get away from us.  So it proved again last night as our lead lasted for all of 11 minutes and indeed should only have lasted 9 when Seb Larsson inexplicably placed a free header wide.  Instead of counting our blessings and learning our lesson from it another cross 2 minutes later found Johan Elamnder getting a yard on Richard Dunne and powering home a bullet header.  To be fair, it was an excellently worked goal and it would be churlish to attach blame to the defence for it, sometimes you have to put your hands up and just say it was a great goal.  Needless to say, this roused the Swedes and the half time whistle came as a relief as we hoped the break would enable us to re-focus and try and regain the intensity we'd played the first half hour with.

Unfortunately, that intensity never materialised and once the second half began it was with Sweden in the ascendancy again.  The only tactical change seemed to be a pointless swap of wings for Walters and McClean and bar a shot from the latter player that Isaksson in the Swedish goal had covered all the way we were creating little.  In fact, only the alertness of Forde in goal prevented us falling behind when he dived at the feet of Larsson to prevent a clear goal chance.  Again, this let off only delayed the inevitable.  A quality through ball from Ibrahimovich should have amounted to nothing with the defence pushed up but some very lazy play from Glenn Whelan kept Svensson onside and he coolly finished past Forde.  I can't understand what Whelan was doing, if you're going to track the man then get tight and get goal side, he was caught in no man's land when all he had to do was step up with the defence and leave his man offside.

So 2-1 down and really up against it.  Surely time to try something different.  Having seen Robbie Brady and Simon Cox warming up I was really hoping to see Brady come on with Walters looking likely to make way but no, despite the fact that it's been proven time and time again that Cox is completely ineffective out wide it was he who stripped off his tracksuit top and came on.  No tactical change, just a like for like so needless to say the pattern of the game didn't change at all.  We increasingly looked like we'd need to get a break to get back into the game as we were creating little and playing with increasing predictability.  A chance duly arrived when Long got onto a misplaced pass but with Keane in acres of space screaming for the ball, Long, for reasons best known to himself cut back onto his other foot and straight into a defender.  It was a serious lack of vision and cost us really the only chance we had of getting back into the game.  A final sub saw Anthony Pilkington introduced for his belated debut replacing McClean in another like for like sub that once again did little to change the pattern of the game.  Although he looked lively in his cameo we had resorted to aimless long balls at this stage and bar one half chance where Keane slid in but failed to reach the ball before Isaksson the game ended with a whimper rather than a bang and with it Ireland's chances of making it to Brazil, barring the most unlikely sequence of results.

To say it was a disappointing end to the day is an understatement.  To lose 2 home games in a campaign is unacceptable and this is the first time it's happened since the Euro '72 qualifiers where, funnily enough we also faced Sweden and Austria although we managed to get a point from the home game v. the Swedes before losing to Italy and Austria.  While our away record is very impressive, our home form under Trap has been very poor.  Even in our darkest days in the past, we usually got it together at home and it's a pretty damning indictment that this is no longer the case. Once again, a large portion of blame for yesterday's defeat has to lie at the feet of the manager with the complete lack of a plan B galling in the extreme.  The players shouldn't be immune from criticism either, a large number of them (including many that people have been clamouring for) simply didn't show up last night. Marc Wilson had a nightmare at left back and you can't blame the manager when a professional player kicks a 5 yard pass to a team-mate directly into touch.  James McCarthy was anonymous in centre mid as was Whelan beside him.  While Long won his share of ball in the air, his play when the ball was at his feet was very poor and the lack of vision when Keane was free in the box was inexcusable.  To be fair to Long, he had a disruptive week and finding out your club manager is happy to let you go can't be good mentally.  McClean justified his inclusion and can be happy with his nights work as can the 2 old warhorses in Keane and Dunne (notwithstanding Dunne being beaten in the air for their first) and Forde did well once again although he may think he could have done better for the winner.  Although we played well for 30 minutes, any kudos gained for that is more than cancelled out by the hour that followed it.

So, instead of looking forward to an early morning flight to Austria on Monday with a degree of optimism there's an air of despondency around as our qualification hopes seem holed below the waterline.  I won't give up until it's mathematically impossible and given that I don't think Sweden are particularly impressive bar Zlatan, it's not beyond the realms of possibility that if he has an off day they could come unstuck in Astana but it's a pretty forlorn hope.  I've always measured an Irish manager's success on whether he can deliver a top 2 finish or not and, to be fair to Trap, he has done this is both campaigns so far.  Some may say he's been lucky to do so but it's a results business and we've had our share of bad luck over the years.  If he manages to turn this around then the luck he's previously had will pale into insignificance.  I believe he'll see out the campaign and go with a two out of three record which ain't bad as the song goes.  Where we go from there remains to be seen and I really think that his reign will only really be judged once we see what another manager can do with the players we have at our disposal.

Fingers crossed for a rare away victory on Tuesday but even then I think that'll be too little too late.
Posted by Drumcondra 69er at 19:39