Making World Cup would be "pinnacle" for old pals act 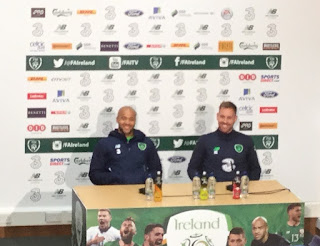 Darren Randolph and Rob Elliot may be in competition for the Ireland goalkeeper’s shirt but that rivalry doesn’t affect a friendship that goes back to their teens.

Speaking after training at FAI headquarters in Abbotstown on Tuesday, Randolph said that making a World Cup finals would be the pinnacle of both their careers. “Me and Rob came through the academy at Charlton together so to come all this way and both of us to make a World Cup would be incredible.”

Elliott added that qualifying for the finals would be “a brilliant achievement for everyone but especially with us two having been in the same youth team together, making Russia would be amazing.”

Elliot told the assembled press that the pair’s friendship goes beyond their fight for a place on the team; “We work hard together and try to help each other as much as we can. At the end of the day, the manager picks the team and we can only work as hard as we can. It’s then down to the manager. If anything, it makes you closer because you know how hard it is.”

With Elliot having missed out on last years European Championships through an injury picked up on international duty, he believes that getting to a World Cup would be the completion of a journey: “After missing the Euros, it feels like it will have come full circle but we’re not there yet and have two tough games to come. The World Cup is obviously the pinnacle for any footballer so hopefully after this week, that dream will be realised.”
Posted by Drumcondra 69er at 10:31