I'm struggling to work out what was the more pointless action, me staying up till 3:45 am to watch the Ireland v Mexico friendly or the actual sending of the management and squad (or at least a skeleton of it) to New Jersey to play the fixture at all. 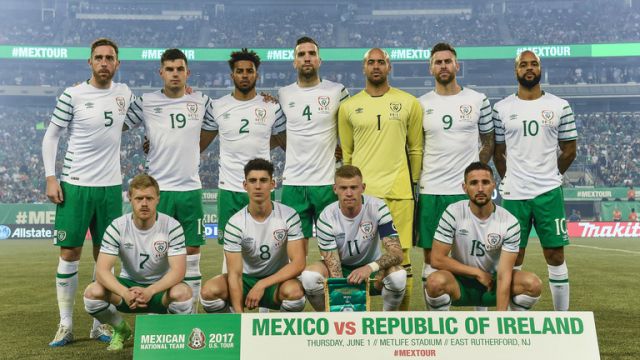 Although the USA will always be associated with one of the greatest moments in our history after Ray Houghton's goal in the 1-0 victory v Italy in our opening World Cup '94 fixture, it's been a less than happy hunting ground other than that. The 1994 campaign petered out in disappointing fashion including a defeat to Mexico now more famous for John Aldridge's conniption fit on the sidelines. Even before then, the 1992 US Cup brought a team (that really should have been preparing for the European Championship after being pipped by England despite an unbeaten qualifying campaign) over for defeats to the USA and Italy before a victory against Portugal. However, that trip was overshadowed by the first shots in the Mick McCarthy / Roy Keane spat being fired on the journey home following an afternoon's unscheduled drinking. Four years later, another US Cup saw McCarthy as manager taking over a squad in transition (after Big Jack's team imploded during the Euro '96 run in) only to have his appointed captain, Keane, not show at the airport for departure without even notifying the manager that he wouldn't be travelling. This overshadowed the games (another defeat to the US, a draw with Mexico and a win v Boliva) and provided another marker in the McCarthy / Keane dynamic as it trundled towards it's conclusion six years later.

Another four years brought another US Cup with the team and fans still smarting from the injury time Macedonian goal that cost us qualification for Euro 2000. Even whatever scant consolation for missing the festival of football in Holland and Belgium may have come from winning the tournament was denied when, despite a credible draw v Mexico and a win against South Africa, a 1-1 draw as the result of a clearly offside goal awarded to the USA cost us the trophy. As this was the last US Cup to be played, it was another seven years before Ireland returned, this time under the guidance, for want of a better word, of Steve Staunton. Another trip more remembered for something other than the results, this one saw the two 1-1 draws against Ecuador and Bolivia being relegated to side news as the headlines focused on Stan's decision to bizarrely award 20 year old Notre Dame college student Joey Lapira a cap in the first game, becoming the first amateur player to represent Ireland since Bohs' Willie Browne 43 years earlier.

Our final two jaunts brought a 2-0 loss to Spain in 2013 towards the end of Trap's reign and, as Martin O'Neill tried to get to know his options in 2014 a 1-1 draw to Costa Rica, notable for a rare missed Robbie Keane penalty, followed by an absolute chasing by Portugal in a 5-1 defeat as both our opponents prepared for the Brazil World Cup and we prepared for another summer on the sidelines. Suffice to say, the only thing to benefit from these regular transatlantic trips seems to be the bank balance of the FAI as the US based diaspora make us an attractive draw for the third party companies who arrange these games. In football terms, any benefits have been negligible.

And so, on to last night's game which, it's fair to say, followed the pattern outlined above. It was clear from the unbalanced squad selection (two keepers, seven defenders, six midfielders and only two strikers) that the management didn't seem to be taking this seriously. Six centre halves making the cut but only one full back? Why not bring the likes of Matt Doherty who's been playing well at left back for Wolves, could do with being blooded and would have jumped at the chance to go? The team selection seemed to back this up with an experimental 3-5-2 formation seeing Shane Duffy, Richard Keogh and John Egan line up as the back three in front of Darren Randolph with James McClean and Cyrus Christie providing support as wing backs. I can see the logic of those selections within that formation but the selections of two wingers, Daryl Horgan and Callum O'Dowda, in central midfield raised a few eyebrows as did seeing Conor Hourihane line up in the holding role given that he's more known as an attacking midfielder. Personally, I'd have preferred to see Wes Hoolahan start and someone like Eunan O'Kane, who actually plays centre midfield, tried rather than putting square pegs in round holes, but, if you're going to persist in doing so, then a meaningless game is the time to do it. Daryl Murphy and David McGoldrick unsurprisingly completed the side as the only two strikers that traveled.

Funnily enough, we actually started the game quite well with Christie getting forward to great effect on the right wing and winning a number of dead balls. In fact, Ireland nearly went ahead four minutes in as a cleared corner was played into McGoldrick who crossed to see Murphy just fail to make contact.  It was immediately clear what the problem was. Despite us being on the front foot, the game was really open with Mexico creating chances either side of ours and our midfield had very little shape to close those spaces. Still, we kept pressing forward and won another corner but it was from that corner that our lack of shape in midfield was ruthlessly exposed. Mexico had been employing a tactic of leaving a number of players up the pitch to prevent us getting bodies up for corners. The corner was played short to Christie whose cross was easily headed clear. With our midfield completely missing in action, Hernandez broke unchallenged through the wide open spaces before passing out to Jesus Corona on the Mexican left. Despite still having plenty to do, he easily shrugged off any defensive attention to curl a great finish into the top corner. A Corona making our lads look like lemons, I guess. Fifteen minutes in and it already looked an uphill task.

Things went from bad to worse 8 minutes later as a simple ball over the top into the box left our defence totally exposed and ex-Arsenal striker Carlos Vela slowed his run enough to initiate contact on his back from McClean as he tried to make up ground. Stone-wall penalty with which Raul Jiminez sent Randolph the wrong way to double the Mexican advantage.  We looked absolutely ragged by now and spent the rest of the half desperately hanging on as Mexico cut us open with ease. The siege was finally lifted towards the end of the half as a goal-bound Hourihane effort was deflected wide, but as the half finished we were lucky to still be only two down.

Given how that half developed and how at sea we looked, I was expecting a few changes at half-time but with none forthcoming, the second half started in the same vein as the first and it was no surprise that we found ourselves three down within ten minutes. Again Mexico cut a swathe through the centre of the park, this time moving the ball out to the right to Oribe Peralta who had a free run at goal. Although Randolph did well to deny Peralta both initially and on the follow up, the ball squirted across to goal to Vela who had a tap in to make it 3-0.

Mexico quickly made a few subs but it was another ten minutes before we did the same with Wes Hoolahan, O'Kane and Kevin Long replacing Murphy, Hourihane and Egan. Another couple of subs followed on 73 minutes with Stephen Gleeson on for Horgan and Alan Browne replacing Christie.This eventually seemed to lead to us moving more towards a 4-5-1 with Richard Keogh moving to right back and McClean dropping into the left.  The changes paid off within a couple of minutes as a McClean foray forward led to a cross only being cleared as far as Gleeson who marked his fourth cap, over a decade after winning his first on a previous US tour, with a tidy finish.

Any hope that this might lead to a barnstorming comeback quickly dissipated as our basic passing remained poor and despite looking a little more comfortable in our shape with Hoolahan and O'Kane in the centre, a nice run and shot from O'Dowda and a good effort from McClean that were both comfortably saved was as good as it got. Mexico were still lively enough to keep Randolph busy and when the ref finally blew for full time, it was a relief that the margin of defeat hadn't been a lot higher.

So, was there anything at all that can be learned in the context of the vital upcoming qualifier at home to Austria on Sunday week? To be frank, I don't think so. It was clear that the players picked weren't comfortable with the 3-5-1 formation but I'd have to wonder how much work in training was actually done on it. I don't think there was ever a chance that we'd adopt that formation in a competitive game with anything riding on it and even if we did, I doubt that we'd be playing two wingers in the centre. It seemed to me that the formation was chosen to try and fit the players he'd brought into the team but playing so many square pegs in round holes seemed counter productive. More likely, this was a game that O'Neill could have done without and we should see a better indication of how we'll line up against Austria in the Uruguay friendly this Sunday.

In relation to the players, there aren't many that can be said to have come out with any credit. McClean put his usual shift in although the penalty is a black mark. Randolph kept the score respectable and Christie was probably our best player going forward. Other than that, none of the starters could be happy with their night. From the subs, O'Kane and Hoolahan at least seemed a bit more comfortable in the middle when they came on and Gleeson will be happy with his goal. Whether that formation would have worked better with O'Kane and Hoolahan in the centre is moot but it surely couldn't have been much worse. All in all, another American road trip to forget.
Posted by Drumcondra 69er at 17:49