As Keane as Mustard 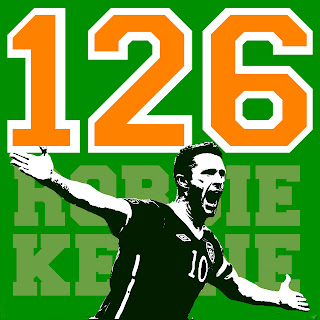 The old English idiom 'as keen as mustard' is defined in online dictionaries as meaning that someone is exceptionally enthusiastic or something 'having a fine, sharp cutting edge or point'.  How apt it is then that last night was all about the man who broke Shay Given's all time Ireland caps record by lining out for the 126th time and who's enthusiasm for representing his country is as bright now as it was way back in 1998 when he made his first appearance in a little remembered friendly away to the Czech Republic as Mick McCarthy began the process of rebuilding the Irish team after the retirements of most of the stalwarts of the Jack Charlton era.  And how apt that the sharp cutting edge that has led him to obliterate the Irish goalscoring record was evident once again as he moved into the top 5 European goalscorers in the history of the game by bagging the second hat trick of his Ireland career.  Okay, it was only the Faroe's, but let's not forget this man has scored vital goals in competitive games against Holland, Germany, Spain, France and Italy not to mention teams from every ranking of the game.  It'll be a long time before we see his like again.

The evening itself had started in very pleasant fashion with the usual walk down the canal from Charlemont to our regular matchday watering hole, The Beggars Bush on Haddington Road, a stones throw from the ground.  A number of the usual crowd were already in with plenty of the faces from the London trip settling into their pints by the time I arrived.  And there was a steady flow of new arrivals as the glorious sunshine brought everyone out into the beer garden to soak up some rays and indulge in some pre match refreshment.  By the time my Dad and his crowd arrived, everyone was in high spirits with the prospect of as close as you can get to a guaranteed 3 points ensuring that there was more debate about what the best result would be from the Austria v. Sweden game for our chances rather than the prospect of us dropping points.  In fact, it was more about how much we should be looking to increase our goal difference by, given how tight the table is.  People were generally happy enough with the team, bar the picking of Simon Cox out of position on the right wing, and my feeling was that I'd be satisfied with a 4 goal victory at the least.

As kick off approached we made our way into the ground and slipped into our spot in the Singing Section on the South stand just as the anthems were playing.  A nice tribute to Robbie Keane had been arranged by the posters on the YBIG site on the 10 minute mark as that's the number synonymous with his Ireland career and a minutes' chanting planned when the above image was to be flashed up on the big screen.  We'd joked beforehand that it would be something else if he were to score on the 10th minute! It'd be something else but, in the event it took Robbie less than half that to put us ahead.  The goal was well worked with Wes Hoolahan, who impressed on his first start, playing in Aiden McGeady who played a good square ball in for Keane to slide home.  A perfect start and should have put us in prime position to push on and bump up that goal difference.  Unfortunately, that wasn't what came to pass.  Although we had all the possession and were camped in their half, the end product was non existent with only one other attempt from Keane causing their keeper any difficulty which ended up being tipped over for a corner.  I felt that a second goal would open the floodgates but the final delivery was very poor with McGeady in particular wasting a number of chances with poor passes and underhit shots.  I find him a very frustrating player to watch, he has plenty of skill and is well able to beat a player but there's a massive lack of consistency with his end product and I find it hard to believe that a professional footballer can have such a weak shot, there were numerous occasions where he seemed to snatch at his opportunities and either give the keeper an easy save or drag it wide.  Add the fact that both full backs were having poor games and Cox looked what he was, a striker playing out of position, and there was a palpable air of frustration in the ground as the first half came to a close.


In contrast to the players mentioned above, a large degree of praise has to go to Wes Hoolahan who was instrumental in practically everything that was positive in the game.  In addition to his hand in the first goal, he showed a willingness to show for the ball and wasn't afraid to harry the opposition and chase the ball down rather than just wait for it to come to him.  And he was involved again when we finally doubled our lead in what was nearly a carbon copy of the first goal.  This time it was Coleman (who'd improved in the second half) who showed wide right and ran onto Hoolahan's perfectly weighted pass to square the ball for Robbie to slide in and take the score to 2-0.  Again I hoped that this would be the spark for us to push on and score another couple but the lack of urgency that had been prevalent was still visible and too many players seemed to be already thinking about their holidays with Marc Wilson particularly culpable.  Things got freshened up with  Jon Walters, McGeady and the aforementioned Wilson making way for Conor Sammon, James McClean and Stephen Kelly.  This immediately paid dividends with McClean getting onto another weighted Hoolahan pass and squaring it to Sammon who controlled and turned beautifully to lay the ball on a plate for Robbie to complete his hat trick.  This belatedly seemed to spark us into life and we spent the last 10 minutes pushing on for the 4th goal that I'd hoped for but the closest we came was when a superb piece of control and finish from Keane was denied by a harsh linesman's flag for offside.  So 3-0 it finished and much as 3 points are 3 points, the performance had to be considered disappointing although Austria's 2-1 win away to Sweden leaves the group wide open. And it should be said that Germany only managed a 3-0 victory as well in their Faroe's game.  If only we'd managed to hold out at home against Austria the group would be looking very healthy but it's still all to play for going into the autumn fixtures.

Much as I was slightly unhappy with the manner of the performance, I've just watched the RTE panel's analysis and I have to say that the lack of factual knowledge and amount of guff spouted on there from Eamon Dunphy is particular was embarrassing.  I know that Wes Hoolahan is the latest cause celebre and it can be argued that this is justifiably so.  However, in his desperation to try and claim the moral high ground and proclaim his undying love for Wes there was some blatant bullshit spoken.  Having first claimed that Hoolahan was first capped by Mick McCarthy in some 'mickey mouse' tournament in the USA he then added that he didn't think the management team knew who he was 3 years ago and that everyone was crying out for him to be in the team for the last several years that he's been playing in the Premier League and Championship. Fact is, that Wes Hoolahan was in the first squad that Trapattoni picked and made his debut under the current manager 5 years ago against Colombia in London.  I've followed Hoolahan's career closely since watching him many times when Shels played Bohs and since initially being included in a squad under caretaker boss Don Given when still at Shels he was ignored by Brain Kerr (a man with an intricate knowledge of League of Ireland players) and Steve Staunton after he moved to Scotland.  Much as it can be argued that he could have been utilised more the last couple of years the only permanent manager that has picked him at all is Trapattoni.  Let's not forget that only 3 years ago Wes was playing in the third tier of English football and was 29 before he belatedly made it to the Premier League after a single season in the Championship.  I've always thought that he was a classy player but to suggest that everyone has been crying out for him to be included in the squad for several years is laughable, I don't recall Dunphy even making a case for his inclusion until he started producing in the Premier League about 18 months ago and even then there were no eyebrows raised when he wasn't involved in the last qualifying campaign. By all means be critical but at least get the facts rights.  It's hard to believe that there's less than 2 years of an age gap between himself and Keane but given his style of play I think that he can still offer us something for a number of years and hope that his recent performances go some way to convincing the manager that this is the case.

So on we go to the autumn internationals and the business end of the campaign.  We're still up against it and really need to produce a rare away victory against a qualification rival in September versus Austria but stranger things have happened.  The reverse fixture between Sweden and Austria is still to come which will lead to dropped points somewhere and with all teams currently locked on 11 points (allowing for the predicted victory for Sweden in their Faroe's fixture on Tuesday) it looks like it'll be tight to the finish.  I think we'll miss out if it goes to goal difference but given that none of our groups have come to that since the ill fated 1982 campaign I'm hopeful that it won't.  A home win against Sweden in September and we can travel to Austria with hope, a defeat and it's curtains.  Here's hoping.....
Posted by Drumcondra 69er at 17:42