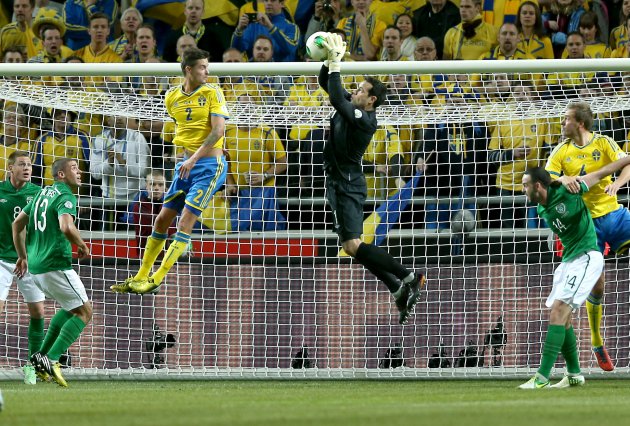 I don't think there's any Irish fan out there who can be unhappy with what we saw in the Friends Arena in Stockholm last night.  Right across the team people performed and there was a solidity that hasn't been witnessed in a long time, possibly since Paris in 2009.

After the sort of chaotic build up that seems to have become the norm under Trapattoni, he seems to have stumbled upon the most effective team he could have put out as a result of Glen Whelan's injury.  Although you had to feel for Robbie Brady, Walters has played on the right regularly enough through his career and given the relative inexperience of the team in competitive games it was an understandable decision.  That said, it brings into focus the pure folly of Trap's habit of announcing the team the day before the game.  Had the team that started the game simply been announced an hour before kick off it wouldn't have been questioned.  Although Paul Green's selection undoubtedly would have raised eyebrows in some quarters, with Whelan's injury it was the logical choice in the absence of David Myler from the squad and Darron Gibson's continued self exile.  Unfortunately by naming the team 24 hours previously, Green's selection ahead of James McCarthy became an issue as did the question of whether Brady would start or not.  Personally, I don't think that Trapattoni was questioning Brady's mental strength, when he talks about 'mentality' he means the focus to adhere to the all important system the manager puts so much faith in.  There was nothing wrong with wanting to work on that at the final training session and ensure he was ready but putting it in the public domain was pointless and only led to more confusion and controversy.  The fact that Trap has been using language like that since day one is irrelevant now that the knives are out and elements of the media are ready to jump on any vague statements rather than try and make sense of them.  In fairness, I don't think that his worries about Brady fitting into the system was the reason why he made the change, more that, as stated above the starting 11 had become more inexperienced with McCarthy's inclusion.

Onto the game itself and the first 20 minutes really were superb from Ireland.  Neat passing, good build up play with a number of corners forced before Sweden got into the game at all ending with a half chance on the far post for Walters.  One great chance then came to Robbie Keane who unfortunately took an air shot on the sort of chance we've seen him instinctively put away on many occasions over the years.  You'd have to question whether playing in the MLS gives the level of sharpness required to bury chances like that.  That aside, I though Robbie had a decent game before making way for Wes Hoolahan in what may be a taster of things to come. Shane Long then generated a great chance for himself before snatching at his shot an ballooning it over the bar.  Sweden began to come into the game but the back 4 all acquitted themselves very well with Seamus Coleman and Marc Wilson also getting forward very well. I was concerned about Davy Forde's selection in goal but he played superbly and was up there for man of the match for me.  He was solid when he came under a pressure before half time and we went in at nil all relatively untroubled and having shaded the first half.

More of the same was required for the second half and I was delighted to see us begin it in the same vein as the first with the midfield again imposing themselves very well.  Although Green hit a few wayward passes, he covered the ground very well and broke up play far better than most expected.  His discipline also gave McCarthy the chance to impose himself on the game in a manner that augers very well for the future.  While his final ball in the last third on occasion let him down (one in particular when James McClean was free on his right), his general play and distribution elsewhere on the pitch was excellent.  He has to play on Tuesday regardless of Whelan's fitness and I'd also stick with Green as I feel he's more mobile than Whelan, particularly if Whelan is carrying a knock.

When we did come under pressure Forde again was more than equal to the task and pulled out some top drawer saves as well as dominating his area in a manner that I haven't seen in a long time.  While not putting Forde in the same class, even Shay at his best wasn't the sort of keeper to come and claim corners in the way that Forde's extra height enables him to do and seeing the ball stick to his gloves under pressure was very encouraging.  It was also good to see Trap make positive subs as the game wound down.  I'd like to see Hoolahan get more game time and it may be time to think of starting him and holding Keane in reserve to come on in the last half hour of games where his fresh legs may be useful against tiring defences.  I don't think that's very likely though given the managers history and I do still believe that Keane is our most natural finisher and most likely source of goals.  There's still a place for him in this set up and his experience is invaluable.

So onward to Tuesday now with renewed optimism. More of the same with a sharper cutting edge required. Same starting 11 with Hoolahan given more of a run after Robbie busts a gut for an hour will do for me
COYBIG!!!!