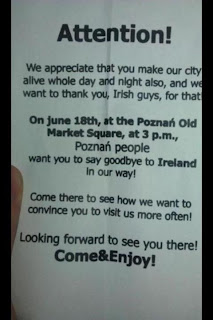 With temperatures due to hit the thirties today we're currently on a sweatbox of a train back to Poznan as I write this having decided to stay an extra day in the beautiful city of Torun rather than head yesterday as originally planned. Seems a good few Irish did the same as there's a good number of us on the train but the mood in general is far more subdued than for previous games with tonight's game being nothing more than a dead rubber and the chance to try and regain a bit of pride and send the Italians home.

Torun was still pretty busy the last few nights, we spent Friday evening watching the thunderstorm disrupt things in the Ukraine for their game with France before meeting up with the Brummies and the Quinns and co and becoming honorary Swedes for the night as we tend to do for any country England happen to play. In keeping with the rest of the football on the trip that obviously didn't work out too well! :). Few drinks and a bit of a sing song with some other fans and locals back in the square and that was that. A few renditions of The Fields of Athenry could be heard as we walked around, people over here are not happy with Roy Keane's comments at the moment, not one fan is happy with what's transpired on the pitch but given that these comments come from a man who's previously on record for criticising what he called the prawn sandwich brigade for not getting behind Man U when things weren't going their way it's difficult to take that level of hypocrisy seriously. Can't have it both ways Roy. No one will chant 'you only sing when you're winning' at us.

Saturday brought with it a lot of excitement as the Poland v Czech Republic game was on that evening with Poland in a must win situation. With the game not on till 8.45 we took the afternoon to take in some more of the sights and killed an hour with a boat trip up the Vistula river which runs along the outside of the city walls. Beautiful scenery on both sides but it started clouding over heavily while we were out and after hearing a couple of thunderclaps and witnessing some lightning we docked and dived into a barge bar on the river just as the heavens opened again and a similar thunderstorm to the one witnessed the previous night in the Ukraine hit. I don't think I've ever seen rain like it, it absolutely hammered down for about an hour before passing and leaving a rainbow hitting the water right in front of us, amazing sight. Funny enough a police boat came up the river just then so the running joke was that it was to guard the pot of gold!

We'd more or less decided to stay the extra day in Torun at that stage as none of us fancied the madness of the night before the game in Poznan so myself and Lou headed back to the hotel to sort the extra night out before joining the rest for dinner, painting our faces in Polish colours and trying to find somewhere to cheer on our hosts. We settled on a bar packed out with locals where the atmosphere was rocking although the heat inside made us move out onto the terrace where things were a bit more roomy. All the locals were bedecked in red and white and there was a real sense that this was their night as they started strongly and it seemed like a matter of time before the goal they longed for would go in. Unfortunately half time came and went scoreless and the Czechs began to dictate things in the 2nd half. Still they roared their team forward as one of their players went on a forceful run from midfield but suddenly he overran the ball and the Czezhs hit on the counter right through where he'd run from and a couple of passes later the ball was in the Polish net. The deflation of the atmosphere was like a balloon being pricked before the defiant chants of 'Polska!' picked up again. But there was a desperation about their play at this stage and while they had a couple of chances very late on they never looked like getting the 2 goals they needed. In fact, with word coming through of the Greek victory against Russia most seemed to be happy enough that the last minute effort cleared off the line hadn't gone in as while a draw was no good to Poland it would have put Russia through and the Czechs out. International rivalries can do funny things to sports fans! That said, we seem to be taking on the role of tournament jonahs with every team we cheer on taking a beating! :)

After the game there was a lot of mutual back slapping and consoling going on with the Poles giving it loads on the Irish chants they'd picked up and the Irish chanting 'We love you Poland, we do!' back at them. The bond between the two nations has definitely been strengthened this past week or so, they've been brilliant hosts and have taken us to their hearts. Still doesn't make up for our results tho! :)

After the match finished, as if on cue another huge thunderstorm rolled in so we dived for cover into what turned out to be an Indian hookah bar complete with cushions laid out on the floor, hookah pipes bubbling away and a very chilled atmosphere! Great spot to unwind for a few hours waiting for the rain to stop! Unfortunately the rain didn't stop so for the third time on the trip got absolutely soaked to the skin as we ran for a cab.

Yesterday was our last in Torun and the weather was actually decent for once so it was a day for sightseeing and relaxing before we headed to a BBQ one of the local hotels put on as a thank you where we watched Holland exit the tournament with 3 defeats to give us a chance of avoiding the wooden spoon if we can get anything tonight.

A few colds and chest infections seem to be creeping in after the various drenchings but armed with cough bottles and tablets from the pharmacy we're now pushing on to Poznan! Not really happy with the team selection, I think Gibson, Walters and McClean should be in for Whelan, Doyle and McGeady but we all know how stubborn Trap is. I believe this is the last hurrah for this team and he wants to give them a chance to bow out with the 11 that qualified. I'm delighted to see Duff get the armband for his 100th cap and would love to see him roll back the clock 10 years as his performances in Japan / Korea were the best I've ever seen from a wide man in the green shirt. He's been a wonderful servant but I think he'll retire now and it wouldn't surprise me to see Keane, Given & possibly Dunne do likewise. No one can fault their dedication to the cause and it's a shame they only made two tournaments but greats like Brady and Giles never graced any so at least they've had the two.

Again, we're travelling with little expectation. If Italy had held on v Croatia and only needed a draw I'd have expected the draw tonight. The fact they need the win and could still go out even with that is ominous. If we can summon up the spirit of Paris then maybe be can have a chance. We live in hope!
Posted by Drumcondra 69er at 22:49